The first known spurs were used even before the Roman empire and spurs have been an integral part of Equestrian culture ever since. They allow a rider to give direction to a horse without having to compromise a secure position on top of the animal. The first spurs were simply a small spike or knob on the back of the heel band, but into the 12th and 13th centuries rowels began to be more popular. In the middle ages a Knight was known by his gilt (or gold plated) spurs and they were a sign of status, as many fine spurs are to this day.

The Cowboy spurs that are well known to us today descend from the spurs worn by the Spanish conquistadores who wore what was known as the Espuela Grande, or Great Spur. These spurs often featured fine filigree style heel bands and shanks, but their most distinctive feature were rowels that were as large as 8 inches in diameter. 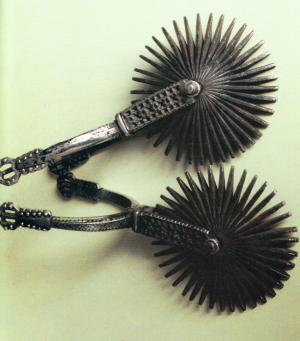 an example of the Espuela Grande

The Espuela Grande would evolve through time into what became known among western cowboys as the Chihuahua style spur, these spurs were typically made in Mexico and then exported into other areas of the west.They often had silver inlay or engraving, jingle-bobs, and large rowels. Later, makers in California would adopt and adapt from this Mexican tradition of spur making and the two styles share much in common.

In contrast to the “fancy” styles of spurs manufactured in Mexico and California a more utilitarian style evolved in Texas. Typically spurs by Texas makers feature less engraving and intricate work, but are usually somewhat heavier and the Texas spurs were also known for their one-piece construction where the shank and heel band were constructed from a single piece of metal.

Finally, there were a number of spur and bit makers in the Great Plains who produced a unique blend of the Mexico/California Style and the Texas Style. It can often be difficult to identify these spurs an a style all their own, but generally these spurs can be described as mixing many elements from the other main Styles of spurs.