A rider communicates with a horse in many ways, from a prod of the spurs, to voice commands, weight distribution, etc. Maybe the most important control mechanism though is the bridle which is made up of the bit, headstall, and reins. With a gentle hand the horse can be turned left or right or pulled up. The bit is an incredibly important part of this assembly, being the actual part that the horse feels most. There are three main types of bits, each of which has subtypes of its own.

Bar Bits – A straight or slightly curved mouthpiece, with a ring on either end. These bits have no lever action to them and are often used for driving.
Snaffle Bits – A jointed mouthpiece with rings at either end. These bits also have no lever action but do exert some pressure from the pinching of the mouthpiece.
Curb Bits – A bit with different mouthpiece styles mounted to cheekpieces that have a ring on top and bottom. They allow the rider to use lever action to apply increased pressure to the horse’s mouth. Many curb bits also have port mouthpieces that exert pressure on the roof of the horse’s mouth.

Bar and Snaffle bits are relatively simple and utilitarian bits, without much room for embellishment or artistry compared to the curb bit. There are many styles of curb bits, which can be distinguished by unique cheekpiece patterns and mouthpiece design. Before getting to all these different types let’s look at a diagram of a curb bit so that we can get all of the terminology straight. 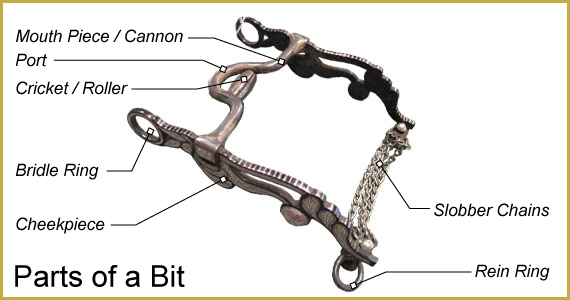 It’s very important to be able to identify all the parts of a bit so that when discussing them you can understand what others are talking about and so that you can properly describe a bit you may be looking at or talking about. Shown above are the terms used to describe the different parts of a bit. To collectors, the most distinguishing thing about a bit is the design of the cheekpiece and the engraving, embellishment, and the maker. It’s also important to be able to talk about the different types of mouthpieces because bits are often categorized in this manner. Shown below are the most common mouthpiece styles, as well as common cheekpiece designs.

Bit Mouthpieces
The mouthpiece on a bit has a great effect on how a horse feels the pressure of the bit. There are many more designs that have been used over the years, and some mouthpieces like the spade and half-breed can be found in many different subtypes of their own. Here we show the most common and well-known types but there are at least 15-20 different mouthpiece designs that you may run into at some point. Contact Us for help if you’re confused or don’t see anything to help you here.
Straight – A straight bar is just that, a straight piece of stock that will put most of its pressure just on the bars and tongue of a horse. A larger bar will make for a less severe bit
Port – A port is a bend in the middle of the mouthpiece and depending on the height and width of the port is can be more or less severe. Most curb bits will feature a port of some type, which relieves some pressure on the horse’s tongue, and if it’s a high port, will put pressure on the palate (or roof of the mouth) when used.
Half-Breed – A half-breed bit is typically a port bit with a roller or cricket installed in the port, though sometimes it’s a straight mouthpiece with a port/cricket added on. Half-breeds are essentially combinations between features of a port/spade or straight/spade.
Spade – The spade bit features a high spade shaped attachment on a straight bar, with a cricket, and often with braces to either side. Spade bits are most common in the California tradition and frequently have copper crickets and braces. Spade bits can be very severe in the wrong hands and can easily injure a horse, so they were a symbol of skilled horseman, they are not generally used today, but are popular with collectors.
Jointed – Jointed curb bits are relatively uncommon among collectible bits but they occasionally pop up from contemporary makers. A jointed bit is just what it sounds like, instead of a solid mouthpiece, it has a joint that acts like a snaffle. You may also see combination snaffle/curb bits with rein rings in multiple locations on the bit.
Bit Cheekpiece Designs
Santa Barbara – Credited to Jesus Mardueño, one of the most popular California style bit designs. Virtually all makers produced some version of this design.
California – Another popular style credited and popularized by G.S. Garcia Saddlery.
Globe – A very easy style to identify with large rings that make up the cheekpiece. Credited to Buermann.
Fresno – Another popular California bit designed by G.S. Garcia.
Nevada – Another Garcia design, a nice cheek pattern that allows for beautiful engraving in silver.
Carmel – Very similar design to the Santa Barbara, with a concho instead of a hole in the cheekpiece.

One of the most important features of any collectible bit is the maker’s mark. Not all bits are marked and it is possible in some cases to attribute an unmarked bit to a specific maker, but no matter what a marked bit will be worth more than an unmarked one even if the two are both 100% sure to be from the same maker. Listed below are some of the most collectible makers of Texas and California style bits, as well as a list of some Contemporary makers who are doing high-craftsmanship work. There are also many other makers who are not listed here, to see a complete list, visit our pages for Texas Style Makers, California Style Makers, and Contemporary Makers.