Spurs have long had a romantic reputation as a symbol of the Old West, Cowboys, and all the associations that those things entail. Spurs have a long history though and spur artifacts have been found dating to dates in ancient times when riders would attach wood or bone to their feet to use as spurs. In Medieval times, the spurs were a symbol of Knighthood and elaborate gold and silver spurs with gemstones and other crazy details became very fashionable.

The styles of spurs that became popular in the young United States and in the Old West were descendants, refinements, or copies of older European styles. There are two main branches of American spurs, the California or Vaquero style which descended from the Spanish style brought over by conquistadores, and the Texas style of spurs which were developed from the spurs that settlers brought from the eastern states and colonies which in turn came from England, France and other European nations. Shown below is a comparison of the two styles of California and Texas style spurs. Advanced collectors will also classify other styles based on the configuration of the heel band, shank, engraving, mountings, buttons, and other features but for the majority of spurs you’ll run into being able to distinguish what tradition of spur making you’re looking at will give you a way to start discovering more about them. 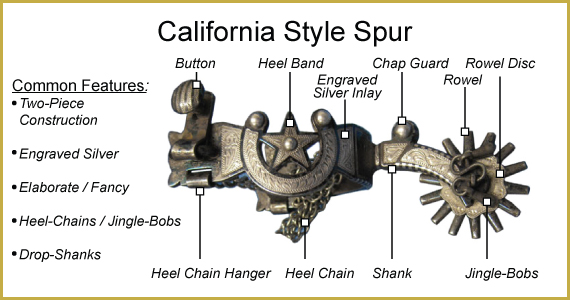 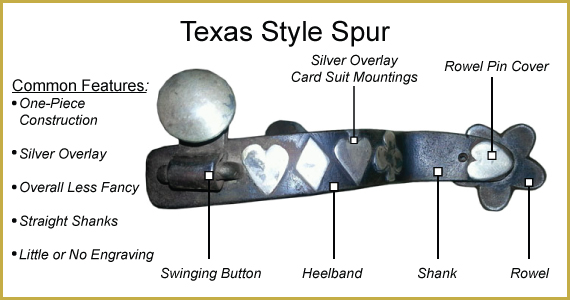 It’s very important to be able to identify all the parts of a spur so that when discussing spurs you can understand what others are talking about and so that you can properly describe a pair of spurs you may be looking at or talking about. Shown above are the terms used to describe the different parts of spurs. Not every spur will have every feature, but all will at least have a button, heelband, shank, and rowel. Features that vary spur by spur are the decoration (none, overlay, inlay, chased, etc), construction type (made from a single piece of metal, or individual pieces that are put together), chap guard (does or does not have), shank type (straight, curved, gal-leg, bottle-opener, etc), rowel type, jingle-bobs, decorative rowel cover, and even other features that are rare or unique.

There are literally hundreds of different designs of spurs out there, of course way too many to describe here. There are many popular designs and styles that have been outlined below to give you an idea of the terminology used by collectors when describing many different designs, motifs, or other features of spurs.

One of the most important features of any collectible spur is the maker’s mark. Not all spurs are marked and it is possible in some cases to attribute an unmarked pair of spurs to a specific maker, but no matter what a marked pair will be worth more than an unmarked pair of spurs even if they are both 100% sure to be from the same maker. Listed below are some of the most collectible makers of Texas and California style spurs, as well as a list of Contemporary makers who are doing high-craftsmanship work. There are also many other makers who are not listed to see a complete list, visit our pages for Texas Style Makers, California Style Makers, and Contemporary Makers.