Mike Morales was born in Mexico in 1888 and was apprenticed in G.S. Garcia’s shop by 1902 where he worked for four years before moving to Pendleton, Oregon to work for Hamley & Co. During his time at Hamley, Mike supervised several other craftsmen in the production of bits and spurs. In 1915 Mike moved to Portland to open his own shop and he produced his own line of spurs sold by a catalog he published. Morales’ business prospered in Portland as he employed many bit and spur makers to fill orders for his bits and spurs as well as other items such as stirrups, saddle trimmings, belt buckles, conchos and other items. In 1927 Morales moved his business to Los Angeles where he lived and worked until his death. Mike Morales marked his work off and on, when he did mark his bits and spurs he used a squashed M, sometimes two of them. The design for this M was clearly inspired by the squashed H of the Hamley and Co. mark. Mike’s earlier work for Hamley and even prior to that was sometimes marked as “MIKE MORALES MAKER” 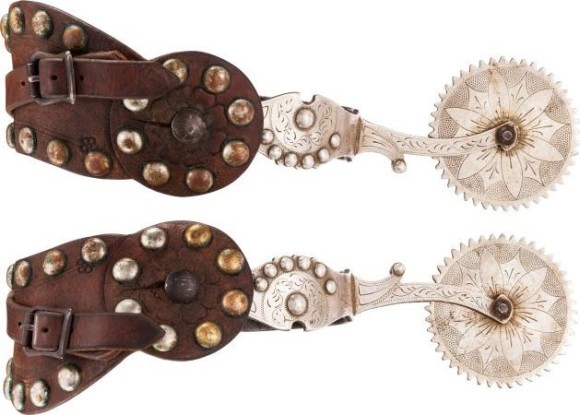