Guadalupe Garcia was born in Sonora, Mexico but was raised in California in the San Luis Obispo area. He apprenticed in a saddlery shop and eventually moved to Elko, Nevada and opened his own saddlery business. He had seven children and his sons Henry and Les took over the company after his death. The Garcia Saddlery in Elko provided a place where many famous makers would learn and hone their craft and at any time Garcia might employ as many as 20-30 craftsmen. Garcia was famous for creating a prize-winning saddle at the 1904 World’s Fair in St. Louis, and the Garcia Saddlery sponsored and organized a Rodeo in Elko as well. Most Garcia bits and spurs are marked as GS GARCIA ELKO NEV or GSG HAND MADE, some also will have an extra letter stamped to denote which worker in the shop actually made the piece as well.

The following is a timeline of his life and brand:

1864 – Born in Sonora, Mexico
1882 – Opens his first shop in California
1894 – Moves to Nevada and begins work where his company employs many other master spur and bit makers. Many people this that by this time he was doing very little work himself as he was running his business and working as a Rodeo promoter.
1932 – G. S. Garcia turns the business over to his sons Les and Henry
1933 – G. S. Garcia dies
1936 – Les and Henry move the business back to Salinas, California, however it shuts down for WWII
1946 – Business reopens after the war
1957 – Les sells out his portion of the business to Henry, Les continues to produce some items marked “Les Garcia – Reno”
1979 – the J. M. Capriola Co. buys out Les Garcia and moves the company to Elko, Nevada, and is still in business producing spurs today 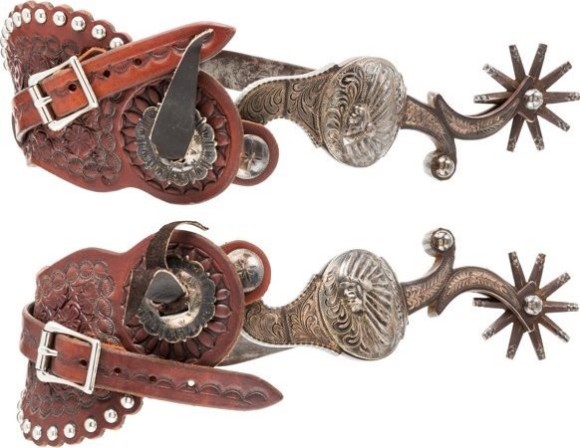